Plastic surgery on the runway at New York Fashion Week 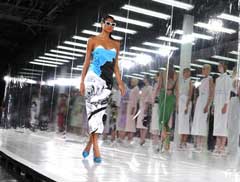 New York Fashion Week is one of the most highly anticipated events in the Big Apple, and people come from all over the world to see what styles will be making their way down the runway. This year, for the first time ever, plastic surgery was incorporated openly and proudly into the mix.

A plastic surgeon organized the Faces of Beauty runway show, which saw models strut their stuff while plastic surgery before-and-after photos flashed on TV screens behind them, according to Cosmopolitan magazine.

Though the concept may seem a little strange, the surgeon who was behind the show was hoping to dispel rumors about the cosmetic surgery industry. Many people's ideas of plastic surgery are based on what they see on TV or read in the tabloids. You can pick up any celebrity magazine at your local grocery store and read about botox gone wrong" or other horrifying mistakes celebrities have made when going under the knife.

However, the vast majority of plastic surgeries go off without a hitch, and those that are done well and subtly rarely make the news. The show Faces of Beauty displayed everyday men and women who had undergone plastic surgery demonstrating to the world that cosmetic surgery results can look natural and beautiful.

The models at Faces of Beauty were grouped not by the clothes they wore but by the procedures they had undergone. The first group had all received nose jobs, or rhinoplasty. Another group had all undergone liposuction.

"Like many women, I had lipo on my thighs," one model from the lipoplasty group told the news source. "I work out seven days a week, but I had cellulite and it made me unhappy. ... And with new technology, a lot of these procedures are getting less expensive, so it's accessible to more and more people."

Why go under the knife?

If you're considering undergoing plastic surgery, bear in mind the purpose behind this fashion show. It was meant to demonstrate that plastic surgery, like fashion, can bring confidence to those who may feel that their looks are lacking in some way.

The American Society of Aesthetic Plastic Surgeons reminds patients that they should undergo a thorough consultation with a board-certified plastic surgeon before they elect to go under the knife.

This will allow them to ask any questions about their results, recovery experience and the procedure itself.