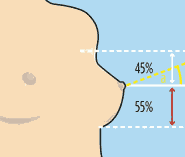 His mission is to study these breasts, so that he can find the mathematic proportion for the perfect breast.

Many can say that the perfect breast is a subject of personal preference and that it’s not scientific.
This leading surgeon conducted a three-month study, analyzing the breasts of 100 topless models in order to determine the precise factors that make attractive breasts of women.

He used the tools of measurement of a computer, in order to examine the dimensions of regions on and under the nipple, and the corner in which the part of nipple with the top part of the breast inclines.

The proportion is 45:55. “In the majority of cases the part of the breast was in a straight line or concave, and the nipple was in an upper location, in a section of roughly 20 degrees. In all the cases the breasts appeared tight, in an inclined way, and arranged with a bulky curve”.

A lot of women seek surgical intervention of breasts after a pregnancy, which has resulted in them losing their breast and they ask their surgeons “to fill” the top.

However, when they show them a picture of the breast, that matches the proportion 45:55, and the second with a plenitude of breast in top, very few women select the second picture. According to the American Society Plastic Surgery, the increase of breast is the most popular aesthetic surgical operation.

To ask a woman what size of breast she wants is not enough. This is where the experience of a specialized plastic surgeon in breast augmentation appears.

More for breast augmentation on: www.kapositas.com